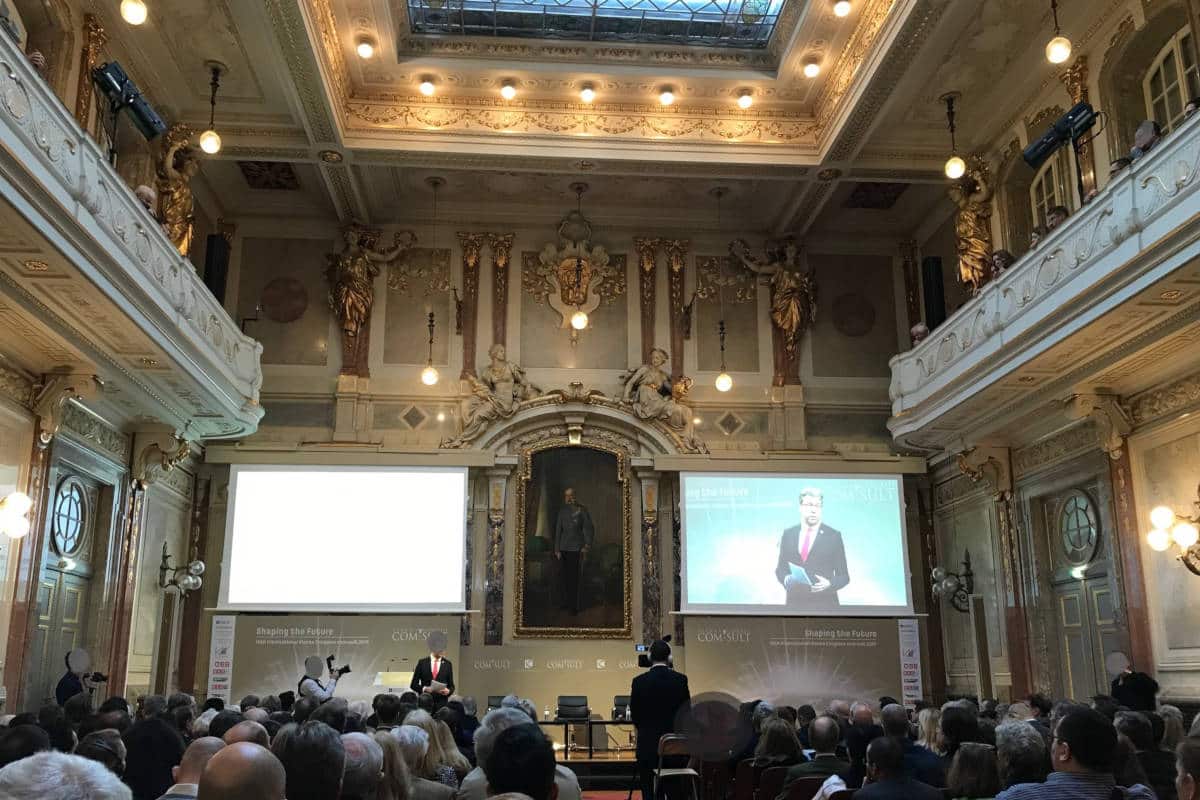 Vienna has a long tradition as a location for high-caliber international conferences. The Vienna Congress “Shaping the Future” brought together prominent figures to discuss the main economic challenges and prospects for Europe, the European Community and the accession countries. Around 1600 top managers, decision-makers, CEOs, entrepreneurs and business and political leaders from all over the world come to this congress each year. It was a privilege for Global Trade Specialists to attend this year.

When I sat at the congress and looked up to the Emperor Franz Josef, I wondered what he may think of the European Comunity. Where is it going, is it shaping a bright future and who is really leading it? Is there an economic future for the EC? Will the EC continue to fall behind with its slow economic growth?Is there innovation within politics and the economy of the EC? What is the future of the countries that wish to enter the EC such as Macedonia, Kosovo and others?

At the Vienna Congress “Shaping the future” speakers from politics, business, science and Nobel laureates had commented on these and many other questions. Some of the speakers were: former President of the Republic of Czhek (Vaclav Klaus), Nobel Laureate (Ada Yonath, Kurt Wüthrich, Dan Schechtman), European Innovator of the Year (Michela Magas), Minister of Transport, Innovation and Technology (Norbert Hofer). The represented countries were Albania, Austria, Germany, Israel, Kosovo, Liechtenstein, USA and more as well as representatives of the United Nations and NATO.

I found Erion Veliaj a very dynamic speaker. He gave many personal reports on innovation, highlighting innovation in one of the most isolated communist countries in the world, Albania. As a young boy, the food was rationed and distributed mainly in cans. He was instructed never to dispose of the sardine cans. Later he learned that 8 cans were used to make antennas for television. At night, when the lights go out, they all set their “sardine” antennas outside their window to watch Italian television. After the fall of communism, it was a shock to outsiders that so many Albanians could speak fluent Italian.

Innovation that benefits a nation

Second, he told the story of his first day in office as mayor (after communism). He kept getting reports, such as the lady from the second floor is having an affair with the man on the fourth floor. He asked a colleague, “Why am I receiving such reports? I do not want to know this information”. The colleague said, “we have spied on each other and reported to the authorities all our lives during Communism”. Now you are the mayor, people have not stopped spying on each other, and people think they have to report to you.

With the smartphone, the mayor found an answer to his dilemma. Since there were very few landline phones in Albania, the end of communism made it possible for all citizens to quickly own a smartphone. He had citizens of the city of Tirana photograph all potholes, broken lights, etc. and send the pictures into the mayor’s office. In return, he sent the appropriate people to repair the street lamps, the street potholes and so on in the city. The city saved the cost of hiring a thousand people to see what needed to be fixed and done. In return, the city sent the citizen a picture once the reported item was fixed. What happened? The citizens stopped reporting on each other and began to report on what needed to be done in their city. A great example of innovation and creativity in finding a solution for the benefit of all.

The Nobel Laureate in Chemistry, Ada Yonath, an Israeli, explained her process as a pioneer in the work on the structure of the ribosome. It was her curiosity to want to know how it works, and in this way she has driven the project forward for so many years leading to her discoveries.

Another speaker I liked to listen to was Ron Prosor, the former secretary-general of the Israeli Ministry of Foreign Affairs and ambassador to the United Nations, and the head of the Abba Eban Institute for International Diplomacy. I really enjoyed his wit and wisdom. Mr. Prosor mentioned that you have to look into the box before you look out of the box. Several speakers talked about innovative projects created by entrepreneurs in Israel.

Mr. Prosor also shared the following story in response to how Israel may find a solution in difficult situations.

It was a very interesting congress with a good mix of science, politics and business. Hearing the different views of speakers from all over the world was great. It was a wonderful to be introduced to innovative projects that have influenced society and our way of life.

If you have an innovative project that needs prototyping or mass production please contact us at Global Trade Specialists for a free quote.